Posted on 28 October 2019 by Vulnerability of the heart 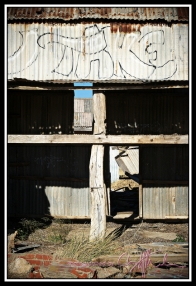 There was a man who lived in torment. A man who was rejected. According to the people in the city their rejection was for good reasons. He was dangerous, insane, controlling. In torment this man would cry out in the night. He tore his clothes off and cut himself. Sometimes he would be so overwhelmed that he would flee to the desert. People knew of him, but no-one wanted to know him. Everyone knew what was wrong with him, after all it was obvious the evidence of his destruction was all around him. Their inability to set him free scared them. They labelled him a madman. They attempted to chain him, but to no avail. No-one could control him. All they knew was that he was to be avoided. They despised him. He didn’t belong in the city. The man lived in the caves, graveyards; the unholy, hidden places.

The Heavenly Father saw this man, he new him well. While he knew this mans wrongs and heard the label the people had given him, the Father saw beyond this. He saw the man, the truth of his pain. Unlike the people, the Father wasn’t afraid. He saw the demons that possessed him. He even knew why this man was tormented like he was. The Father’s heart broke for the man and for the people in the city. He wanted to tell them of his intense love for them. He wanted to show them his power and authority over this enemy. That they need not be afraid. He wanted them to know about his mercy and ability to save. The Father told his son Jesus about the man. Jesus was some distance away, so the Father asked him to travel to the other side of the lake to meet the tormented man. The Father knew the answer to this mans torment was his Son.

Like the Father, Jesus was not afraid and was confident in his Father’s plan. In response Jesus gathered his close friends, many of whom were fishermen, and they got into a boat to journey to the other side. His friends didn’t know why or even fully understand the importance of the journey, they just followed Jesus’ leadership. Instinctively they set sail for the destination that Jesus mentioned. In perfect peace, full well knowing the Father’s plan and trusting in the authority that his Father had given him, Jesus fell asleep. He awoke to the sound of terror. It was his friends. They were terrified. In their affliction and fear they accused him of not caring. After all how could he be sleeping in the midst of the worst storm they had ever seen? Now awake, Jesus looked at the storm. His friends saw the waves. They heard the wind howling. They felt the boat groan, strained by the storm; threatening to break. They were seasoned sailors, this was not their first storm. They had done everything that they physically could think of to save themselves, but nothing was working. What they didn’t see, is what Jesus and his Father could see.

There was nothing that they could do in the natural that was going to bring their salvation. A different perspective was required. A perspective that required height advantage, that is, the ability to see it from God’s perspective. For them to see from this vantage point required knowing the Father, having faith and trusting him. Something that they were still learning. In almost blind obedience they followed Jesus desire to go to the other side of the lake. They had no idea of the tormented man that Jesus was about to set free. How the enemy loved tormenting this man and how this torment held the city captive to fear. The enemy was not okay with the Heavenly Father setting him free. This was his territory, the man and the city belonged to him. In anger and fear the ruler of this world stirred the wind and sea with such violence that it brought fear and anguish even to the strongest sea-savvy men.

Unlike Jesus’s friends, Jesus trusted his Father and his soul groaned within him. How he longed for his friends to see what he and his Father could see. But they were trapped in physical mindsets. Jesus wanted them to be people who lived in this world, but be so one with the Father that they didn’t live bound to the natural. In response, Jesus arose in his authority and rebuked the storm and told the sea to be quiet and still. At the sound of Jesus voice the storm fled and the sea stop it’s turbulence and became silent. Jesus friends stood in stunned awe. They had never seen such authority. How is this possible? Even nature itself, the wind and waves, obey him. Jesus looked over to his friends. He loved them so much, and so desperately wanted them to see beyond the natural. Even now as he stood before them, despite his demonstration to his friends the authority found in his word, the only thing that saw was nature obey. He co-created nature, why would it not? What he really wanted them to see is the authority the Father had given him over the one who caused the storm.

At last they came to the destination that Jesus had purposed in his heart. Nothing was going to prevent the Father’s plan from coming to pass, he knew that. The moment Jesus’ feet touched the ground the enemy tormenting the man sensed his presence. Compelled by the desire to rid this man of the tormentor and knowing the Father’s plan, Jesus approached the man. He asked the man his name and the demons responded. Jesus rebuked the demons commanding them to come out. After all he was not interested in knowing the demons, he was only interested in the man. He wanted to know the one who had lost his name and with it his identity and purpose. The one whom the Father loved and was hidden in tremendous torment.

The mans torment was so great that he no longer identified as the one who the Heavenly Father created, he identified himself as the one who tormented him. The man despised himself. He so desperately wanted to destroy himself and rid himself of his retched life. No purpose, no hope, no future, he was hated and despised. In shame he hid from himself and the world. In absolute pain he cried out. There was no end to his terror. As he stood before this man called Jesus, he felt something unfamiliar. A sensation that he had never known. He felt his tormentors tremble in fear. With great interest he watched them go from towering beasts to whimpering fools. They cried out in terror, “Why have you come to torment us. Leave us alone, Son of the Most High God”. They feared being sent away from their perceived home, to the place of no love; endless isolation. The man Jesus, the one they feared, spoke. At the sound of his words the noise, the darkness and tormenting pain suddenly ended. The tormentors left his body and were cast into the pigs nearby and were destroyed.  With new eyes he saw himself and Jesus, his Saviour. The world inside him and around him was forever changed. His body once naked, was now clothed. His life he despised, now beautiful. At last freedom had come. What was he to do now? He asked Jesus if he could go with him where-ever he went. But Jesus, who the local city rejected, had a different plan for him. Jesus wanted to fulfill the plan of his Father. The plan to reveal the Father’s mercy and love to all. Jesus knew that the man could do such a thing and asked him to return to the city, to his family and tell all of what the Lord had done and how the Father had mercy on him.

So the man returned to his family and to the city. He told all what the Lord had done. Those who heard and saw what God had done were amazed.

About Vulnerability of the heart

I am a wife, a mother, and a treasured child of God. My Christian faith is my source of strength. I’ve fallen into the depths of despair and been carried out of it in the loving arms of God. By his grace I have been healed. God has taken me on an incredible journey of discovering his love and faithfulness. I believe in a merciful God who has never left me. He is forever faithful.
View all posts by Vulnerability of the heart →
This entry was posted in Almighty God, Faith, Father God, Jesus, Shame and tagged Christianity, Deliverance, demons, freedom, life, Spiritual Victory, spiritual warfare, spirituality. Bookmark the permalink.

2 Responses to Jesus’ Authority and Victory